Dan Drayton on his ‘most memorable season’

Dan Drayton has raced in every round of the European Junior Cup (EJC) this season.

Taking in some of the most famous tracks in Europe, including Misano, Assen and Imola, Dan has pitted himself against some of the best young riders in the world.

And while he may not have had the success he had hoped for on the track, it’s clear that Dan is enjoying his time in the World Superbike (WSBK) paddock.

“Being in and around the WSBK paddock, among the world class riders, and having the opportunity to compete in the EJC at the best tracks, has been unbelievable,” said Dan after his last race at Misano, a track he particularly enjoyed.

“Misano has been my favourite race track so far. It’s technical, demanding and very fast but I’ve enjoyed visiting and racing at all of them.”

Dan finished in 17th at Misano, in a race that was dominated by an incident involving championship leader, Javi Orellana. The Spaniard crashed out after contact with Emanuele Pusceddu with just three corners to go when victory would have sealed the title with two races remaining. Pusceddu had started the race in second place in the championship.

“I’m not aware of any rivalries on the track or in the village but I am sure there may be some. I’ve definitely made some friends and met lots of nice people.”

“The village is a great place to be and all of the families from lots of different countries are really friendly and get on well with each other. I’m counting down the days because the atmosphere is really good.” 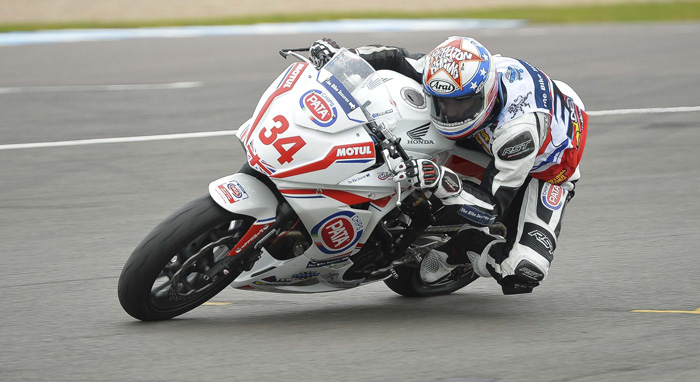 “I want to continue to learn and improve over the last two races, and finishing in the highest position I can is always the aim. I’ve raced at Jerez and like it but Magny-Cours will be another new one for me.”

Before the start of the season, Dan had only raced at Jerez and Donington of the tracks in the EJC calendar. Adjusting to new tracks week in and week out is one thing that Dan flags up as challenging for anyone new to the championship.

“The most difficult thing is the pace of learning and keeping up with the more experienced riders who have raced at these tracks before. Most of the circuits have been a challenge and it is sometimes frustrating to learn them, but that just makes it more satisfying when you nail the flow of them.”

With the exception of learning the tracks, Dan doesn’t have too much to complain about when it comes to life on the road.

“The travelling is tiring but not difficult and I’ve been to some great tracks and some great places already this season, so there are no complaints and I can’t wait to get to Jerez in September.

“In the meantime I’ll be back in work and upping my training after a few weekends off because of racing. I’ll also be out on my racer a bit more now the weather is better, as well as competing in the RC390 KTM British Superbikes. It’s definitely my most memorable season so far!”