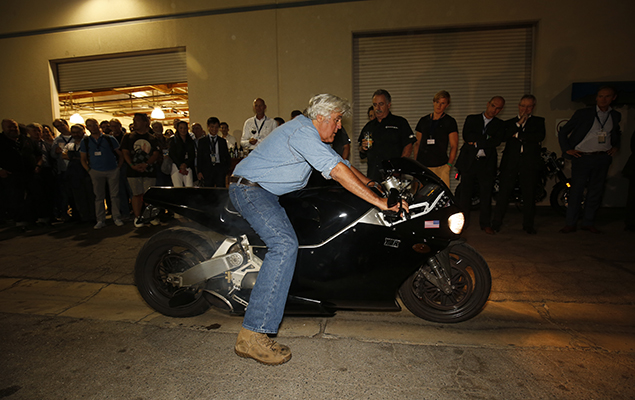 All motorcyclists have fantasies about owning a ‘Dream Garage’ – not for the building, but for what’s inside… a Ducati 916SPS, perhaps, or maybe an original ‘60s Triton and a ‘70s Yamaha XT500 trail bike? Best of all, how about all three?

Some even achieve exactly that, whether through wealth, graft or cunning. But in an otherwise non-descript industrial estate, adjacent to a small local airport on the fringes of Burbank in northern Los Angeles, is the dream garage to beat all dream garages – that of former TV host Jay Leno.

In fact, the word ‘garage’ is simply too small and doesn’t remotely do the place justice. ‘Empire’, perhaps, gets close. 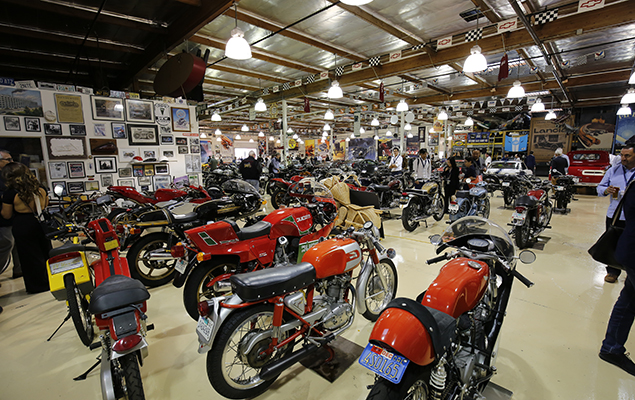 Begun by multi-millionaire petrol head Leno in 1990 and repeatedly expanded since to take in a whole complex of neighbouring buildings, the ‘garage’ is a collection of cars, motorcycles and memorabilia like no other.

Today it comprises over 180 cars, 80 bikes, has three full time staff and is considered one of the finest collections in the US. As such, although only open to the public by special invitation, it’s now the subject of a popular TV show, has it’s own Facebook and Twitter feeds and is the envy of the car and bike world.

But it’s the vehicles that are the true stars. All maintained as runners rather than museum pieces by Leno’s staff (there’s a huge, full-time workshop on-site as well) the car collection, including countless Bugattis, American muscle cars and oddballs such as the Top Gear-featured, Spitfire-engined V12 Bentley, is impressive enough. 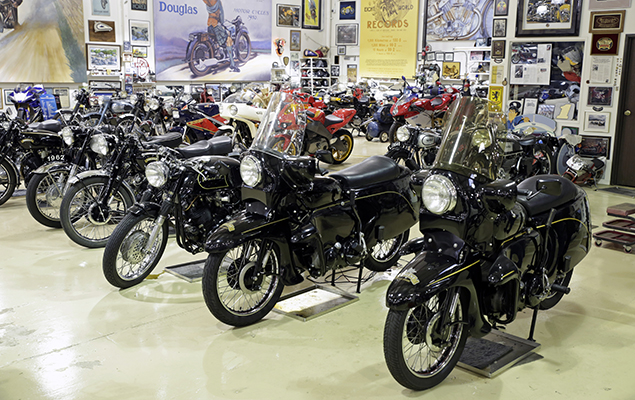 But for bike fans there’s just as much to be amazed by. How about not one, but TEN classic Vincents, including two examples of the ultra-rare, faired Black Prince? Or pristine examples of the equally rare Ducati MHR900, 1974 Norton Commando JPS, Triumph T120R racer or the delicious, original Guzzi V7 Sport? There are plenty of oddballs as well: Suzuki RE5 and Hercules rotaries; a 1988 Ducati 750 Paso (in US market white) and a Munch Mammut. The list goes on…

Nor are they all just exclusive, expensive classics. There’s a pair of virtually new Aprilia RSV4s, a K1600GTL, a S1000RR and a Hayabusa, all plugged in to trickle chargers, ready to go. There’s a humble Aprilia Shiver 750 and a Vespa GTS scoot to zip around town on. Or, when Leno fancies something relatively classic and Italian, there’s an 851 Duke and a mark III Le Mans.

But the highlight of them all is his Brough Superior collection – that’s right, we used the word ‘collection’. Leno, who’s a huge fan of the Nottingham-built ‘Rolls-Royce of motorcycles’, hasn’t just one of the ultra-exclusive, £100,000+ machines, nor has he two or three. He has 26, in what is the largest Brough collection in the world, with a dedicated room all their own. The great man even arrives for our privileged viewing on one. Yes, Leno’s ‘daily driver’ is a Brough, albeit one with modern Michelin tyres… 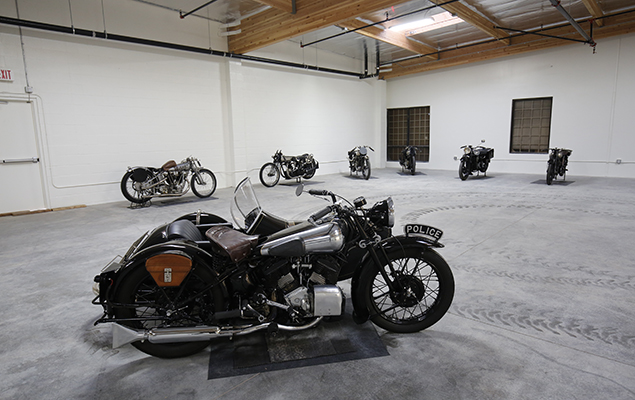 “Right now I’m in my motorcycle phase,” the 66-year-old told us when parking up, before going on to talk us through his collection. “I like Brough Superiors. The one I ride every day I’ve put Michelins on so you can lean it over a little bit. Of course, the front brakes don’t work and, well, the rear only works a little, but they’re fantastic.”

He goes on: “That’s how bikes have changed the most, not with speed – because this Brough’s still 100-mph fast, and in the ‘30s that must have been really fast – but in brakes, tyres, handling and so on. That’s where the big changes have come.”

“With a bit of luck I reckon I’ve another 10 years or so in me before a crash finishes me off!” 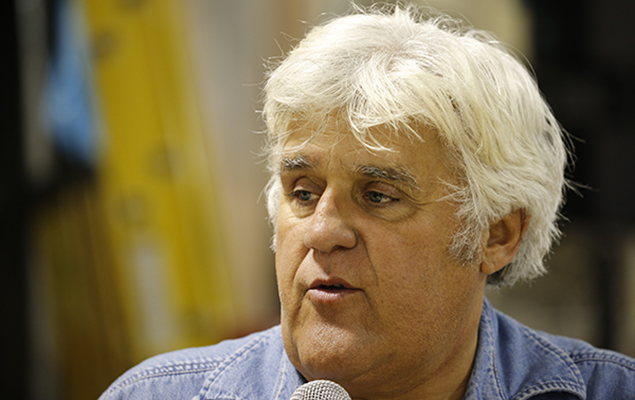 And with that he’s off again, doing a quick demo on his Y2K gas turbine bike before disappearing into the night on his beloved Brough.

If you think you’ve got a dream garage you might as well give up now… But, just in case, get in touch and show us your collection!