Yamaha updates its popular budget-friendly sports tourer for 2018 and adds a GT version to the range. 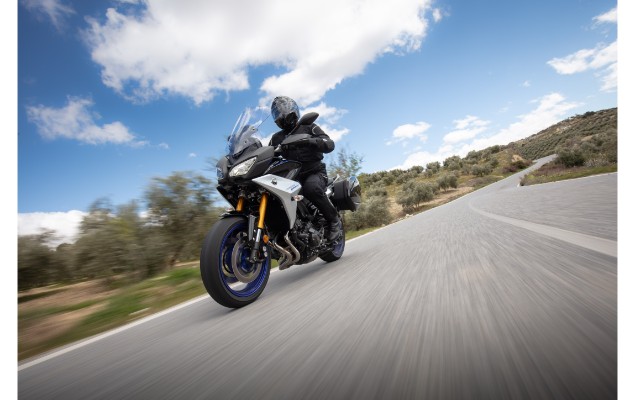 Talk about hitting the mark. When Yamaha launched the Tracer 900 in 2015 it proved exactly what the market was crying out for – a budget-friendly sports tourer that was powered by Yamaha’s excellent MT-09 triple, and came loaded with features such as traction control, ABS, power modes and even an adjustable screen.

And it sold, and sold very well indeed.

Believe it or not, the Yamaha Tracer 900 has cleared over 30,000 units so far and is Yamaha’s best-selling sports tourer, commanding 48% of the firm’s sales in this segment.

When you consider it is up against the likes of the Tracer 700, and even the established FJR1300, that’s very impressive.

Even more so when you look at the larger picture and spot that last year the Tracer 900 out-sold the BMW S1000XR, Suzuki V-Strom 1000, Triumph Tiger 800 and Ducati Multistrada 950.

But with the competition now snapping at its heels, Yamaha needed to up their game and 2018 sees the arrival of an updated Tracer 900 as well as a fully-loaded GT version.

Understandably Yamaha were not wishing to rock the boat too much and haven’t really radically altered the Tracer.

This is more of a revision than a dramatic update. The triple engine is largely unchanged aside from the usual tweaks to the fuelling maps, the chassis is the same, as are the wheels and suspension units, and the electronics are also unaltered.

But in response to customer feedback Yamaha has altered specific parts of the Tracer.

A sharper look brings with it more wind protection and a one-hand adjustable screen that goes up and down by 50mm, while the seat has had its padding levels improved and the pillion’s pegs lowered for extra passenger comfort.

The bars are also slightly narrower and slimmer, again for improved rider comfort.

To bring even more value, the Tracer 900 now features integrated pannier mounts and the swingarm has been extended by 60mm to improve stability at speed, especially with luggage attached.

However, the most significant news this year is the fact that the Tracer has been joined in the model line-up by a GT version.

The Tracer 900GT (Gran Turismo) is effectively an updated Tracer 900 with a few extras aimed at making it a better mile-muncher.

You get colour-matched panniers as standard, upgraded suspension, with the shock featuring a remote preload adjuster, and the forks now fully-adjustable. 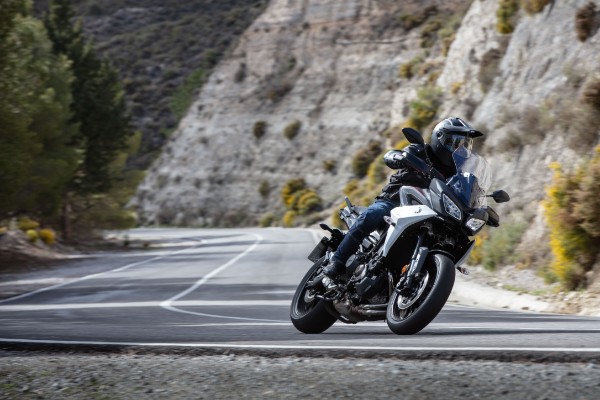 Though generally the Yamaha Tracer 900 would be cheaper to insure than the GT because of its extra purchase price.

But have Yamaha hit the mark with their updates to the Tracer and the new GT version?

When you chat to Tracer 900 owners, there are a few common issues that keep rearing their heads.

The first problem is the screen, which isn’t very effective and is a pain to adjust.

On this score Yamaha have addressed the adjustment problem and the new system makes it far simple to alter the screen’s height while on the go. Which is good.

The problem is the standard screen is still pretty ineffective.

If you want any protection, you will need to buy an aftermarket taller item, so it’s good and bad news.

The other issue that riders often moan about is the Tracer’s soft suspension and on this score it is again a mixed bag.

The standard Tracer is still set pretty softly, and the bike’s tendency to pitch and wobble into bends when the pace ups remains.

There is some suspension adjustment available, so you can dial a bit of this feeling out, but if you are disappointed by your current Tracer’s suspension, the updated model isn’t going to change your mind. 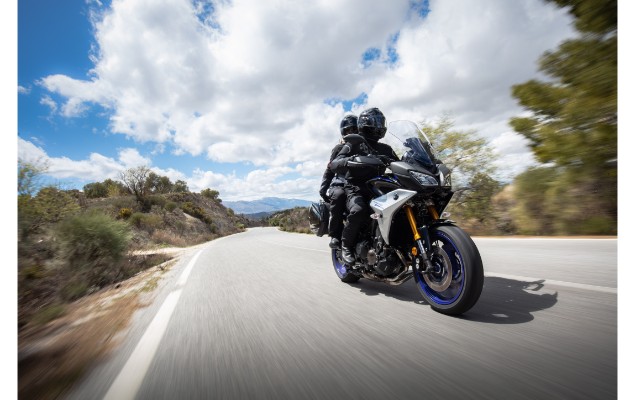 Well, unless you buy the GT version.

With its fully-adjustable forks and upgraded shock, the GT manages to overcome the Tracer’s spongy ride, and for us, this is the GT’s main selling point.

It’s soft enough to be compliant for touring, but adds an extra level of sporting ability than the stock bike slightly lacks through its improved suspension.

In corners the GT is far more composed and you can certainly exploit the ‘sports’ side of this sports tourer far more. And not only that, the GT is also a more accomplished tourer.

There is absolutely nothing wrong with the standard Tracer 900 model when it comes to mile-munching.

Its new seat is more comfortable, the narrower bars give you an improved feeling of control as well as a more relaxed riding position over the old model and the new fairing (screen aside) is quite protective, but the GT’s cruise control and heated grips mean the miles pass with even less hassle.

And the TFT dash, which doesn’t really bring any extra features (connectivity with a smartphone would have been nice and is a bit of an omission by Yamaha) adds a feeling of quality that makes the stock bike’s LCD display seem a bit budget.

And for us, that’s the main thing to be taken from Yamaha’s 2018 update to the Tracer models.

As the heart and soul of the Tracer 900 remains the same, it is hard to push riders who already own a Tracer 900 to update to the new 2018 version as it is much of the same, just a bit better looking and more comfortable.

That’s not to say it isn’t a fantastic sport tourer and amazingly well priced, it’s just that it doesn’t move the Tracer 900 on that significantly as to warrant an upgrade. The Tracer 900GT, however, is a different story.

If you currently own a Tracer 900, really love the bike, but want a new machine, try the GT out.

It is significantly better than the stock bike through sensible upgrades that enhance the overall riding experience and for that reason is worth upgrading to from the older Tracer 900.

If you are in the market for a sports tourer, I’d also be looking to the GT as while the stock model remains excellent value and a great machine, the GT is certainly noticeably better and for not a lot more.

Especially if you buy on a PCP package as the price difference in monthly payments is less than a takeaway pizza.

OPTIONAL EXTRAS
The GT’s panniers, quickshifter and heated grips can be bought as optional extras from Yamaha and fitted to the stock Tracer 900, however the cruise control and TFT dash can’t be retro-fitted.