Triumph’s new Scrambler 1200 might be a nod to the Californian ‘On Any Sunday’ off-road scene of the early 70s, but its beauty is more than skin deep – it delivers scintillating performance, on and off road. 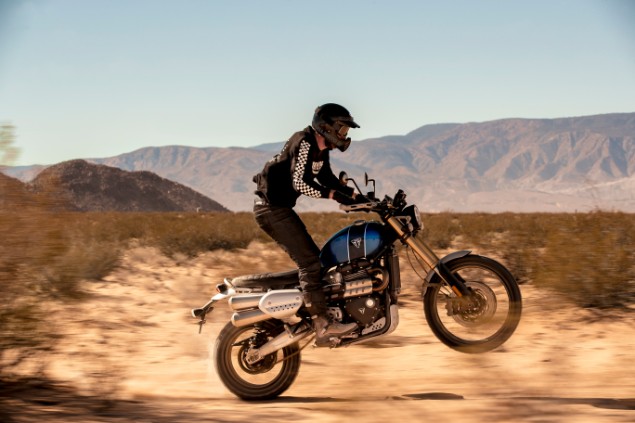 Powered by the Hinckley firm’s ‘High Power’ 1200cc Bonneville engine, also used in the Thruxton, the parallel twin has been lightened and reworked to produce more low-down torque and manageable grunt.

The motor is housed in a new tubular steel frame, designed specifically for the Scrambler 1200 with lazier off-road geometry.

Twisting the throttle rewards with ultra-smooth, easy to meter power. You can burble around in sixth and ride the Triumph’s deep wave of torque, or hang on to the gears and experience a Thruxton-like rush of acceleration and speed. 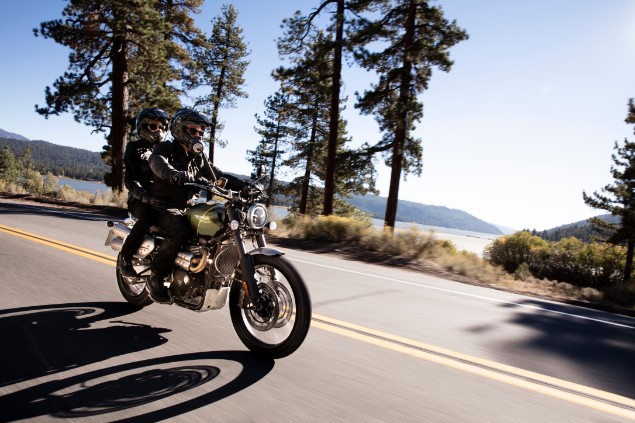 Triumph’s latest retros, from the Street Twin to the Thruxton, are blessed with stable, confidence-inspiring handling and the new Scrambler 1200 carries on that fine tradition.

Ride quality is superb at town speeds, but push it harder and it steers sweetly and obeys your every command, which is impressive for a machine with a 21” front wheel.

Few retro styled scramblers can actually survive for long away from the tarmac, but the Scrambler 1200 XC will handle everything from gravelly tracks to tricky green lanes, thanks to its friendly power and easy agility.

Triumph says it’s a true ‘modern classic and adventure bike crossover’ and it’s hard to argue with them.

It’s as capable as an adventure bike and in fact, with its lack of bodywork and sensible weight (204kg dry), it’s even easier to manage on the dirt than Triumph’s own Tigers. 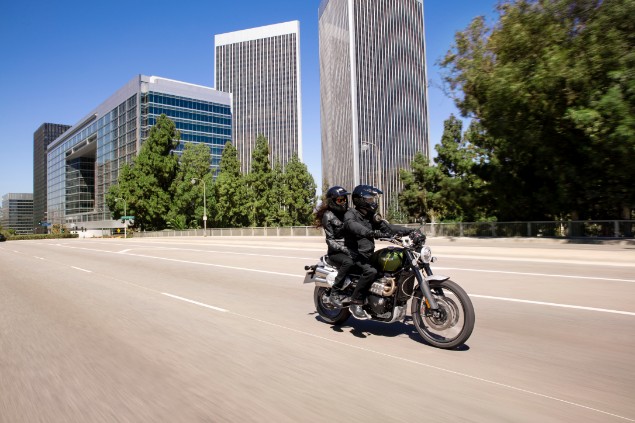 There’s also a massive 250mm of wheel travel (up 50mm), so you can run over just about anything without bottoming the suspension. As a result the XE is slightly slower steering than the XC on the road.

Both Scrambler 1200 models are littered with cool design touches, like twin high level stainless steel pipes, which crackle and pop at tickover and boom when you tickle the throttle, a ribbed bench seat and seamless fuel tank featuring a Thruxton-style stainless strap, Monza fuel cap and cut-outs for the bars on full lock.

Nostalgia neatly mixes with the new with a ride-by-wire throttle, switchable traction control and ABS, riding modes and a second generation TFT colour display, featuring a bewildering amount of information, all easily controlled by neat, backlit switchgear and an option to control a GoPro and Google Maps. 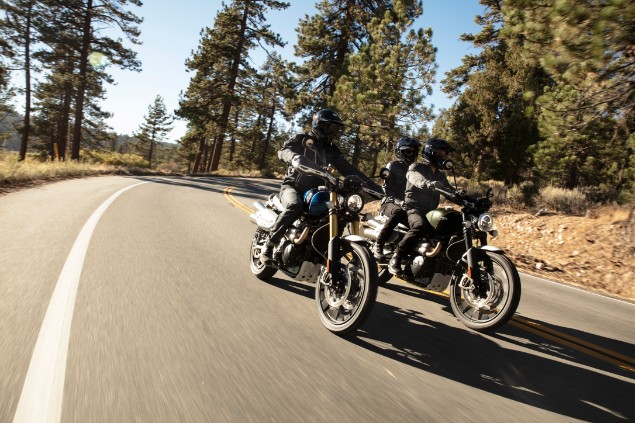 Accessories include heated grips and a tyre pressure monitoring system and there are over 80 touring, style, performance and security accessories available, including two Inspiration Kits (Escape and Extreme).

The XE comes with even more goodies, including an Off-Road Pro riding mode (disconnecting the rider aids), heated grips and an Inertial Measurement Unit, which enables cornering ABS and traction control.

With its longer suspension the seat height is 30mm higher, but the Scrambler still isn’t much taller than your average roadster.

If you like the idea of a go-anywhere motorcycle, but don’t fancy the sensible-shoes adventure route, Triumph’s new Scrambler 1200 will stylishly handle anything you throw at it.