Moto Guzzi is one of the world’s best-known motorcycle brands but has been without a bike in the popular adventure bike class since the demise of the Stelvio 8V last year, when it wasn’t able to meet Euro4 regulations. 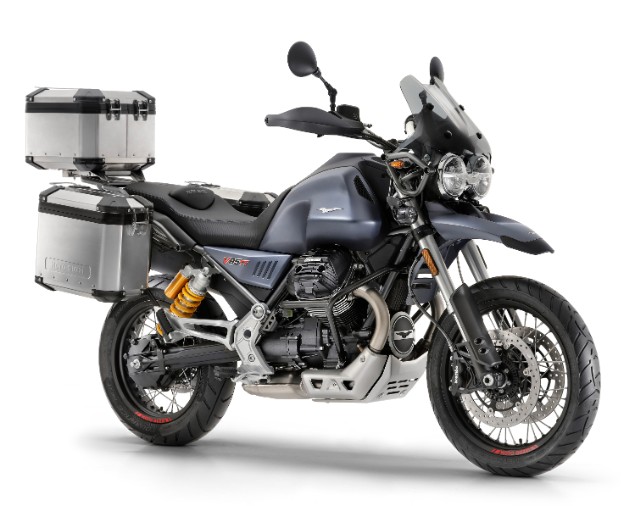 Details of the new V85 TT have now been revealed and that includes the 80hp peak power output which clearly puts this new bike into the middle of the mid-capacity adventure bike class to go up against bikes like the BMW F750GS and Triumph Tiger 800.

Images of the bike were released a few weeks ago but more detail shows the bike’s retro styling actually masks a host of modern technology which can be seen with the full-colour Thin Film Transistor (TFT) dashboard is full-colour and also houses the Moto Guzzi Bluetooth communications system. 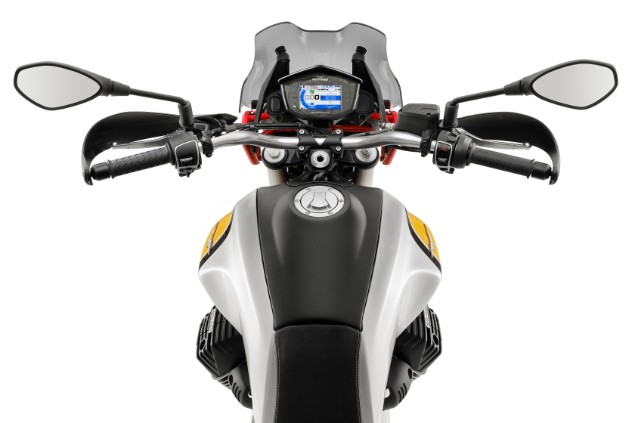 There’s also ABS, multiple riding modes that can be switched between Road, Rain and Off-Road along with LED daytime running lights.

While the bike appears to share an engine with others in the Moto Guzzi range, the air-cooled, transversely-mounted V-twin shares some of the basic layout of the Moto Guzzi V9, it’s actually a new motor.

The need for a new engine has been forced upon Moto Guzzi as a result of ever more stringent regulations governing noise and exhaust emissions and this new motor has been created not just to meet current Euro4 regulations but also forthcoming Euro5 rules that come into force in 2020.

Inside the engine is a new crankshaft along with a revised oil-pump that scavenges oil back into the engine and helps to maintain temperature and means there is no need for an external oil-cooler.

Stronger titanium intake valves (still only two per cylinder) and a larger 52mm throttle body have played a big part in the increased power figure of 80hp. 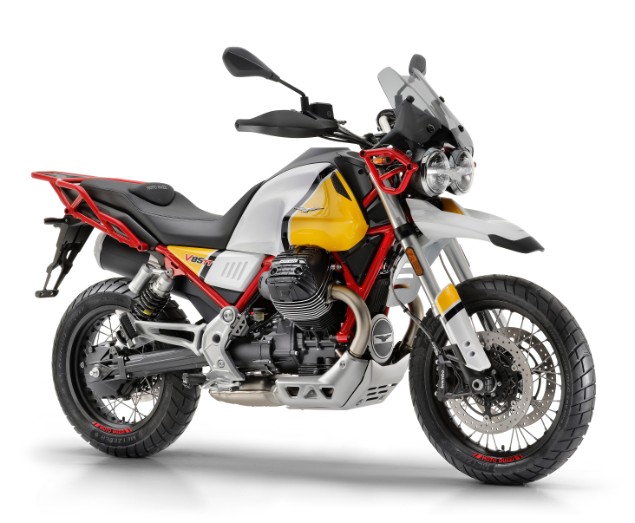 The suspension and chassis set-up are aimed at creating a bike that is happiest on the road but has the ground-clearance and suspension travel to cope with some lighter off-road riding. The use of a 19in diameter front wheel helps with off-road steering control.

The V85 TT is definitely at the more basic end of the class in terms of the suspension set-up which doesn’t have any of the more technically advanced semi-active suspension seen on rivals like the more powerful BMW F850GS but that will certainly appeal to some owners.

The Moto Guzzi V85 TT (the TT bit stands for Tutto Terrano or all terrain) will be available early in 2019 with the price estimated to be around £10,500 to £11,000. A full range of accessory luggage will be available as optional extras.