Bank holiday weekend: Things to do on two-wheels

It’s Wednesday and there’s a three-day weekend coming up.

No doubt you’re all completely aware of the fact but it doesn’t dampen the excitement surrounding the thought of 5pm on Friday.

First thing’s first, is the weather going to ruin any chances of fun?

As it’s a long weekend, it’s fair to assume that the weather is going to be terrible. While that’s not the absolute truth for this weekend, the weather still isn’t brilliant.

On Saturday, the weather is solid if unspectacular, with dry and cloudy conditions forecast for most of the day. Temperatures will even reach a balmy 15°.

On Sunday the weather improves, with temperatures reaching highs of 16° and 17°. While the sun struggles to break through the clouds, it should remain dry with the only mild spell of rain forecast for late in the evening.

Monday gives the UK perhaps its best weather of the weekend. That translates into cloudy conditions with the sun peeping through intermittently.

What to do in the world of motorbikes?

The Bike Insurer will be at Donington for Round 6 of the World Superbikes championship.

As well as the leading lights from superbikes, the young riders of the European Junior Cup will also take to the track for the fourth round of their championship.

The Bike Insurer’s Dan Drayton and Charley Oakland will both be competing at the East Midlands track. 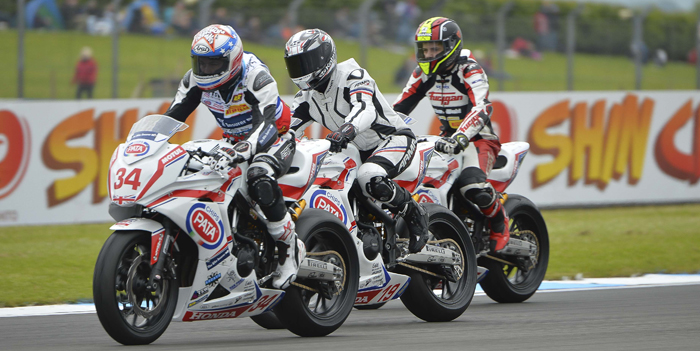 2015 sees the Federation of Harley-Davidson Clubs Europe (FH-DCE) return to England, with an expected crowd of 10,000 to descend on Lincolnshire Events Centre this weekend.

A different member club from Harley’s European federation hosts the event each year, with the 2014 edition in Tallinn, Estonia. It’s the first time in 26 years the event has been held in the UK.

Kempton Park plays host to another classic bike jumble on Saturday 23 May.

30 club stands will be in the show hall with prizes for classic bikes and the best café racers on display. In addition, there will also be a wide selection of stalls selling different bike accessories and gear.

4. Trackdays across the UK

If you fancy a trackday to kick start your long weekend then there are a few options up and down the country.

In Anglesey, a No Limits run trackday grabs the limelight on Friday 22 May.

On Saturday 23 May, Cadwell Park plays host to an MSV trackday while Donington Park and Oulton Park are also running general bike track days through MSV.

Rockingham rounds off the list on Monday 25 May with Focused Events taking over the track.

Back in March, we revealed that Scotland has launched its own answer to America’s Route 66 in the form of the North Coast 500.

As the name suggests, it’s a 500-mile tourist route that takes in the coast of the Scottish Highlands, starting at Inverness.

But brilliant UK road trips aren’t limited to Scotland with plenty of beautiful routes and roads across the rest of the country.

If you’ve got your eye on a stunning route that you think we need to hear about, do let us know.

Starting at the famous cafe at 10:30, the ride out goes all the way to Margate sea front where music and a wide array of motorbikes, scooters and trade stands are set up.

It’s all in the name of charity, too, with The Royal British Legion Riders Branch the beneficiaries.