The world of safety for motorcycles and their riders has gone crazy in the last decade, with traction control now available on many new bikes, ABS now compulsory, and cornering ABS already fitted to some higher priced models from BMW, Ducati and KTM. 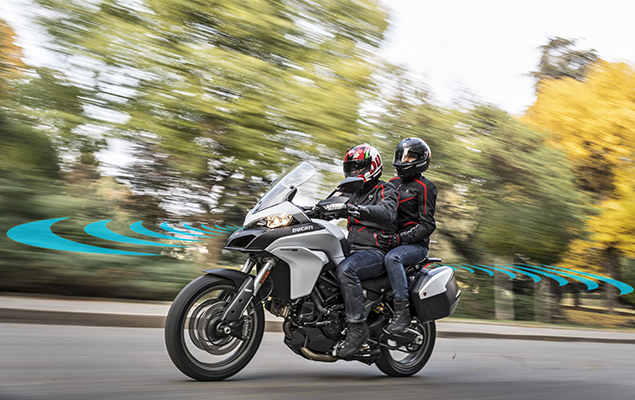 But we haven’t had front and rear radar on bikes. Yet.

All that is set to change when Ducati bring in the technology to motorcycles in 2020.

The firm announced they have been developing a system they call ARAS, or Advanced Rider Assistance Systems, since 2016. And no, this isn’t April 1.

Ducati says that ARAS constantly senses the bike’s surrounding environment to prevent collisions by alerting the rider before it happens so you can react, slam the brakes on or take avoiding action.

The system includes a rear radar which points out vehicles that may be in the blind spot of the rider.

The Italian company has also developed a front radar system which allows the fitment of adaptive cruise control, allowing the radar to automatically monitor and adjust the distance the bike is from the vehicle in front, depending on the rider’s preference.

It also warns the rider of any potential head-on-collisions.

Ducati says that all of these technologies, together with a warning system designed to alert the rider to any existing dangers, will be available on an as yet unreleased Ducati model and will go on sale in 2020.

Many cars, including some cars in the VW Audi Group use similar technologies.

And we’re sure it’s no coincidence the VW Audi Group owns Ducati.

The Bologna-based firm has been at the forefront of developing increased motorcycle technology for years.

They were one of the first to introduce Bosch ABS Cornering to the market when it appeared on the Ducati Multistrada 1200.

Cornering ABS allows the rider to brake fully hard even while leant over without the chance of the front wheel skidding. It was recently added to the new Ducati Scrambler 1100 for 2018.

Back in 2014, Ducati launched the first production motorcycle with a fully integrated airbag jacket, called the Multistrada 1200 D|air. The airbag is designed to deploy in just 45 milliseconds to protect both the rider and passenger in the event of a serious collision. The bike is still on sale today.