Where can I park my motorbike?

One of the many perks of riding a motorbike, scooter or moped is the ease of parking compared to a four wheeler.

But despite parking being easy for motorbikes, it’s not always clear or straightforward to know where you can park without getting a parking ticket.

Things get even more complicated because there are no hard and fast rules that apply to the whole of the UK so we’ve created this guide to iron out the issues and help you avoid the dreaded parking fine.

In a car park

In a car park there will usually be designated motorbike parking bays and quite often they’re free.

As riders account for just three per cent of vehicles on the road, parking spaces in car parks are obviously weighted towards cars, which can mean you might find motorcycle parking bays full.

Within car parks you can leave your bike on hatched areas and between bays as long as it does not cause an obstruction for other users however that is subjective. Check with the car park attendants that where you have left your motorcycle is suitable in their eyes.

You can also park in standard parking bays but there have been occasions of bikes being bumped out of parking spaces and then ticketed for illegal parking so chain it up where possible.

Remember when parking in a bay, whether it’s a car or motorcycle one, to have your entire bike within the lines. If you’re jutting out, you can get penalised.

Parking on the road is slightly more obvious in terms of where you can and can’t park however there are still some grey areas, which is why we’ve broken it down. 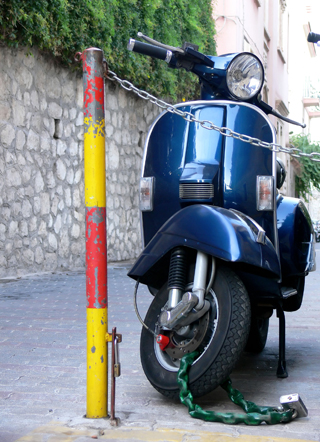 And if they’re double red or yellow lines, don’t even think about it.

Bank holidays – contrary to popular belief, you can’t park anywhere you want on a bank holiday. You should always check on the relevant council website to see where you can park legally.

Pay and Display – continuing the vague parking theme, you can park in some pay and display spots and not in others, again there’s no hard and fast rule.

Specialist bays – unless you are with a child (which presumably you are not as you’re on a motorbike) or have a blue disabled badge, you can’t park in disabled or parent and child parking bays.

Similarly, if you’re not a resident you can’t park in a residents’ parking bay.

Another useful parking solution and another confusing motorbike parking issue is the use of bicycle parking bollards and stanchions.

In some local authorities and councils, the use of bicycle bays for motorbike parking is allowed however in many others it isn’t.

This is normally because these bicycle bays are on footpaths and pavements where there are double yellow lines on the nearest road. That means motorbikes are not allowed to be ridden on the pavement and to access the bays you would need to wheel your bike across a prohibited area.

However there is no specific law preventing motorcycle riders from securing their vehicle in bicycle parking areas, unless you prevent cyclists from using these facilities. 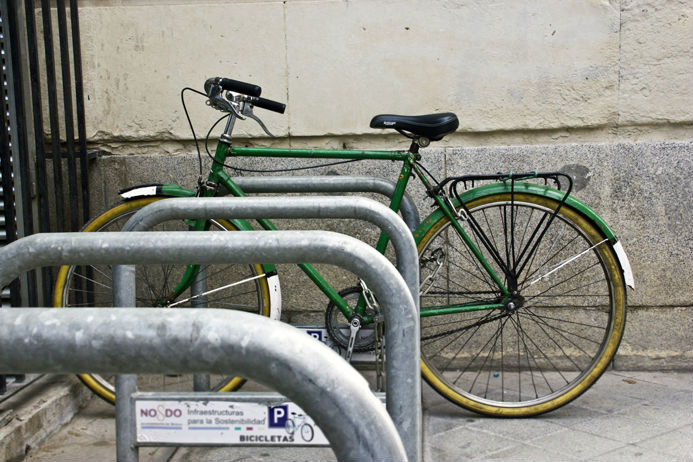 It is a massive grey area and one that litters motorbike forums on the internet with stories of disgruntled bike owners ticketed one day and not the next for parking in bicycle bays.

As a general rule, you should avoid parking there if possible and if not, be prepared for a ticket on your return; you’re taking a risk.

Parking your motorbike on the pavement in the UK is one of the most confusing aspects of two wheel ownership.

Caution is advised and if you’re unsure, do not park there.

A parking law to remember

Part 244 of the Highway Code says: “You MUST NOT park partially or wholly on the pavement in London, and should not do so elsewhere unless signs permit it. Parking on the pavement can obstruct and seriously inconvenience pedestrians, people in wheelchairs or with visual impairments and people with prams or pushchairs.”

If there are no signs telling you that you can park on the pavement, don’t.

And one thing you should definitely do is lock your motorbike no matter where you park.

Not only will it help keep your motorbike safe and secure in the short term, the long term knock on effect is that your motorbike insurance premium won’t increase as a result of your bike being stolen.

If you have paid more than you’d hoped for your insurance, why not get a quote now and see how much you could save by using The Bike Insurer?

As the article points out, it really depends on the place you’re looking to park in but one thing is definite in Londo…

Hi Alan, thanks for getting in touch.

As the article points out, it really depends on the place you’re looking to park in but one thing is definite in London; you cannot park on the pavement at all so don’t be tempted. Unfortunately, different boroughs in London have different rules.

We’d suggest finding the general area you want to park in and using some of the online tools available to work out whether you can or can’t park there, if that doesn’t work, think about contacting the borough authorities directly to find out where you can park. It’s better to find out for sure, rather than run the risk of getting a ticket.

Alan 5 years ago
I live in London, where can i park my motorbike?
motorcycle bays are often full. We are not allowed on pavement on some parts.

I live in London, where can i park my motorbike?
motorcycle bays are often full. We are not allowed on pavement on some parts.

And on the road – will i get a ticket if I park on the car bays? Some resident permit holders and others say business permit holders. for cars you can only park for 3 hours. How long can i leave my bike there for? if its only 3 hours where do i park after that?

passed my CBT, want to get a bike to ride to work – but need to know about the parking first.

andy 5 years ago
Seems if you have a restaurant , they get away with it in Westminster , edgeware road

Riding your motorcycle in the EU post-Brexit

Scenic routes to take with a partner