BMW’s vision for the future of motorcycles 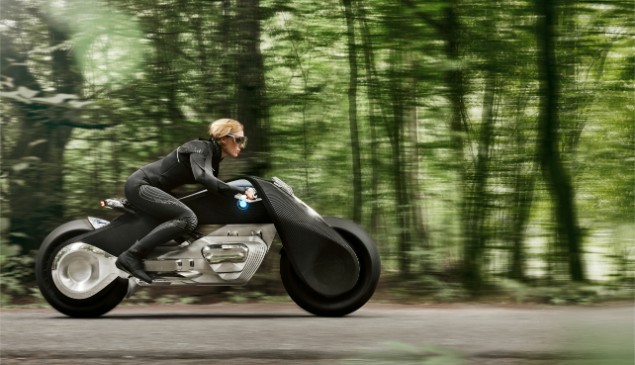 Motorcycles in the future will be so uncrashable that we won’t require helmets or protective clothing, their performance will adapt to rider skill and they’ll feature ‘active’ tyre and chassis technology that instantly adapt to conditions – or, at least, so say BMW.

And however far-fetched that sounds, having seen a demonstration of a prototype -which stood up by itself due to sophisticated gyroscopes – we have to admit at least some of that could come true.

Dubbed BMW Motorrad’s ‘Vision: Next 100’, the space-age concept bike is a showcase for technologies BMW expects to see in the coming generations.

These include: zero-emissions electric power; a ‘Flexi-frame’ that improves handling, active tyres that adapt to the terrain and most radically of all, a Self-Levelling System’ which, BMW says, renders the machine uncrashable so doing away with the need for any protective clothing or helmet! 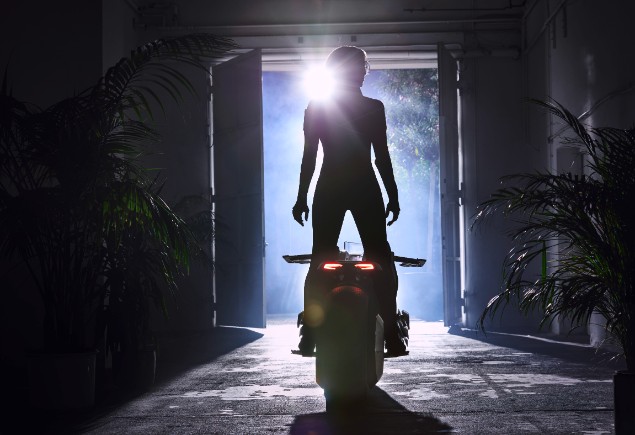 Although neither this machine nor perhaps anything close to it will ever reach production, the concepts and technologies it displays should be taken seriously.

After all, they’re clearly on the agenda of one of the world’s leading motorcycle manufacturers.

“It’s our vision for motorcycling,” BMW Motorrad design chief Edgar Heinrich said. “To us at BMW, motorcycle riding means a lot more than just mobility – it’s a lifestyle choice, a spirit of adventure, the final analogue experience in a more and more digital world.

“And we found that by emphasizing the riding experience and combining that with a self-balancing system and digital technology, the vehicle can act with foresight and protect the rider at all times.

“As a result there’s no need for protective clothing or even a helmet. There’s no way the bike can topple over any more.” 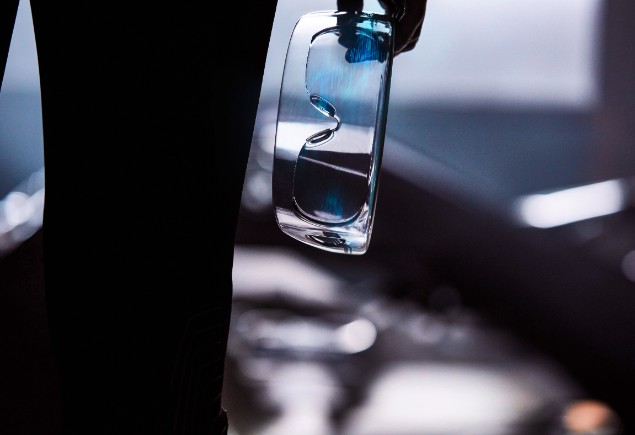 But being ‘crash-proof’ is just the start. In addition, the ‘Next 100’ machine features previously unheard-of technologies and ideas – so much so that the fact it’s electric-powered and zero emissions barely raised an eyebrow.

Despite all of the technology involved, the core idea of it all is to return to the basic, natural appeal of motorcycling, an actual back-to-basics approach.

“We want to give customers the same sense of freedom that they experienced in the very early days of BMW,” design chief Friedrich added.

“We want to give them the same sense of freedom, of the wind in their hair, of making all your senses alert. And with our bike owners will be able to concentrate on this experience with no interference.

“This is how we envisage to motorcycle of the future, combining the best of the analogue and digital worlds.” 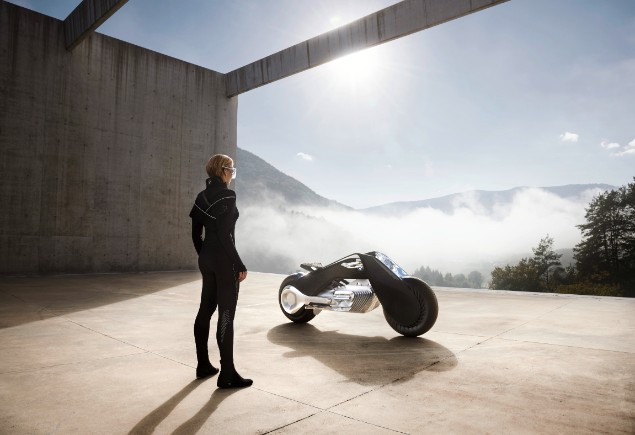 More radically, however, it is capable of changing its shape according to prevailing conditions and aerodynamic and cooling requirements. 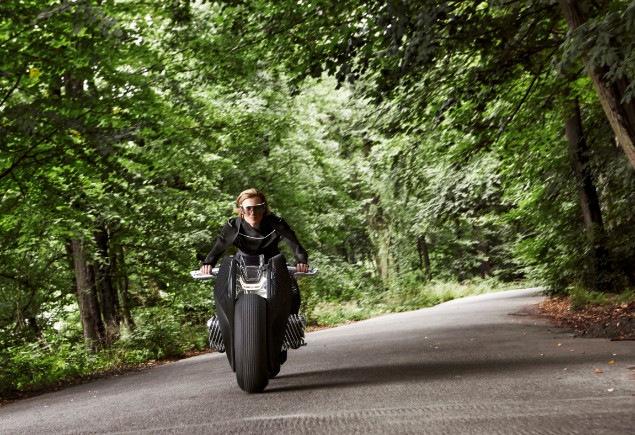 Frame
There’s no conventional frame at all, instead ‘Next 100’ employs what BMW calls a ‘Flexi-Frame’ which is flexible, dynamic and active and only a frame in the sense that it connects the front and rear wheels.

When the handlebars turn the entire frame flexes to enable a change direction the thinking being that at low speeds steering can be light and manageable while at higher speed it can also be stable. 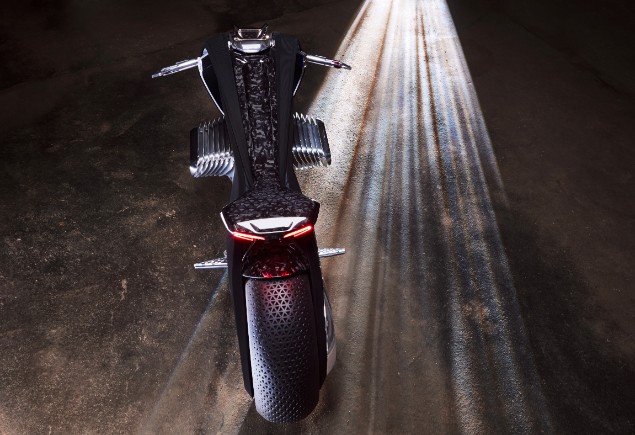 Self-balancing system
Crucial to the concept. A gyroscope-based system operated by sophisticated digital electronics to the effect that the bike can’t fall over.

“It doesn’t tip over,” Edgar Heinrich said. “Even when standing still. A sidestand is only used when the system is shut down.”

Heinrich added that the benefit of this is two-fold: First it’s a learning aid, helping novices increase their confidence.

While secondly, for more experienced riders, it will allow the rider to steadily boost their experience, skills and enjoyment. “It will lift the ride to a whole new level,” Heinrich said. 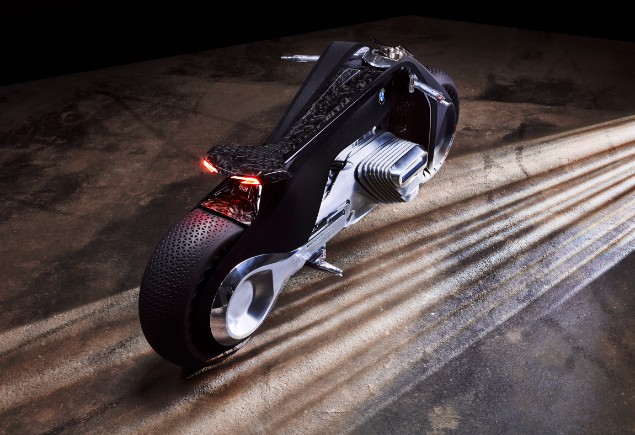 Finish/bodywork
All BMW staff would say is that the ‘Next 100’ would be covered with a matt black material that’s a modern interpretation of the classic BMW look.

Although they did add that it may be a yet-to-be-developed carbon-fibre based substance embedded with other materials. 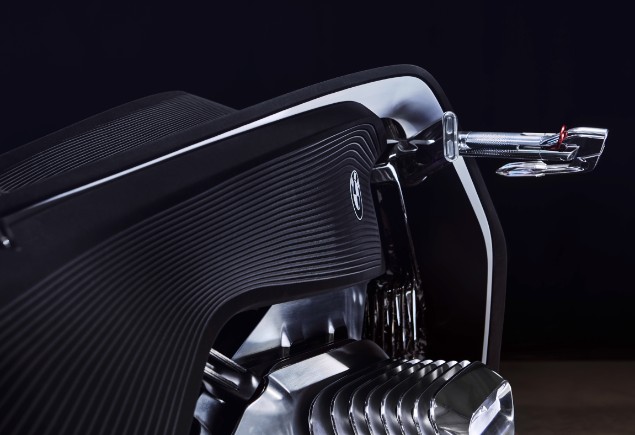 Styling
Intended to be “a homage to the past guiding the way to the next 100 years.”

As such, the distinctive triangle shape along with that of the boxer engine and blacklivery with white stripe is intended to evoke memories of the original R32 of 1923, BMW’s first motorcycle.

Even BMW’s famous logo is highlighted, lighting up in the company’s blue and white colours during the ride. 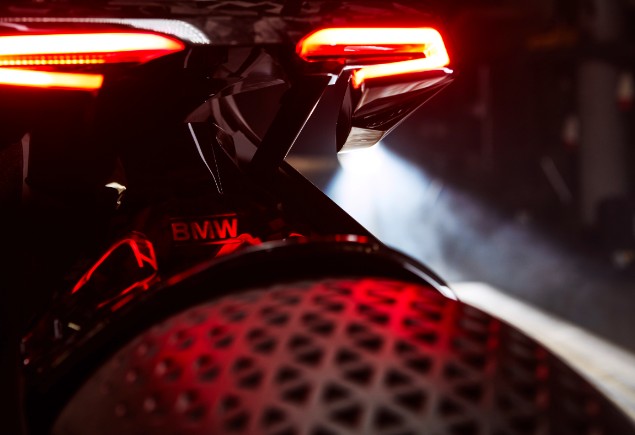 Tyres
No simple round, black hoops these. BMW say they will all be active and dynamic so that, apart from having the traditional ‘cushioning effect’ they’ll also have a ‘versatile profile that can adapt to different conditions’. 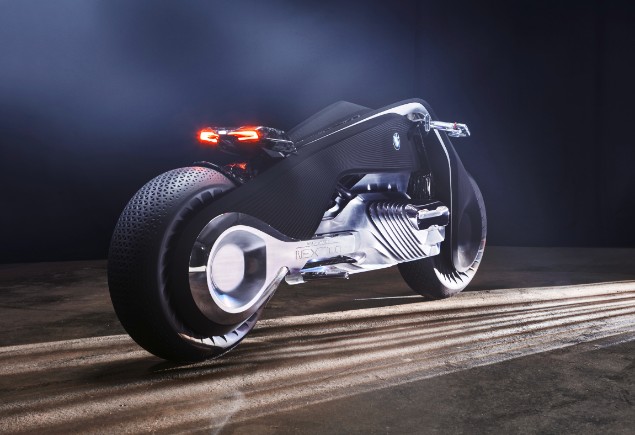 No helmet – just a visor
With no possibility of a crash, BMW believes there is no need for ‘Next 100’ riders to wear a helmet. Instead, a visor would be available that provides eye protection and doubles as a data display.

According to Heinrich, under normal circumstances this would normally display only very basic information, such as the racing line, so as to not be a distraction unless the rider’s behaviour demands otherwise.

It could also display digital map or navigational information. 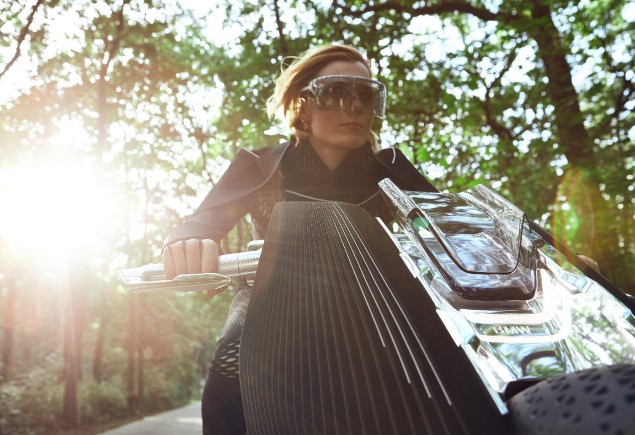 Riding suit
With no requirement for protection – “We believe that in the future riders will be able to enjoy motorcycling without protective clothing,” said Heinrich – the Next 100 rider instead has clothing specifically designed to be fashionable and supportive whil a bionic structure would give physical support. 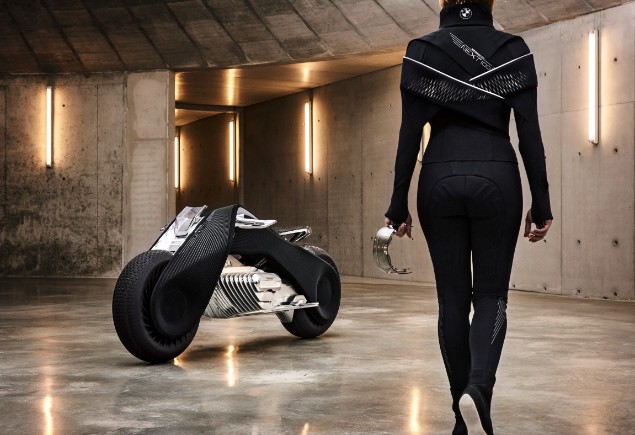