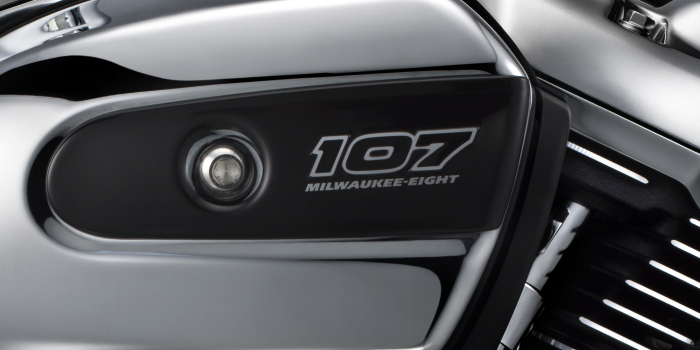 Harley-Davidson has revealed details and images of its most powerful engine yet; the Milwaukee-Eight.

The new V-twin is the ninth two-cylinder engine in the American giant’s history and it will feature on some of its 2017 touring models along with a new rear suspension system.

There are three versions of the engine, including the 1745cc 107 and a Twin-Cooled variant, with the Twin-Cooled 1870cc 114 available for CVO and Street Glide models.

What do the new engines bring?

The new Milwaukee-Eight engines have been optimised to reduce vibration and noise, as well as improve fuel economy.

But importantly, these changes have not been made to the detriment of power.

“It also retains the power characteristic that is the real legacy of the Harley-Davidson Big Twin: strong low-end torque with a broad, flat power curve through the mid-range that’s ideal for the Touring motorcycle rider.”

That will be music to Harley fans that may have worried that the new engines have been introduced purely to meet emissions standards.