Everyone’s heard a speed camera theory in the UK.

Whether the speed camera’s broken, the film’s been taken out or whether it’s just a deterrent, there are lots of different conspiracies floating around about speed cameras and how they work.

All that theory, usually from some not-quite-so-dependable source, makes motorists wonder who’s telling the truth, which is why Brake has revealed the truth behind some of the most popular speed camera myths in the UK.

One of the biggest myths surrounding speed cameras in the UK is that lots of them are switched off.

Essentially that means you can ride past them at whatever speed you want and you won’t get snapped.

And it turns out, there’s plenty of truth behind the rumour.

Brake said: “Various Freedom of Information requests have revealed that some speed cameras are not fully operational in the UK.”

One rumour that is true is that you must be notified of a speeding offence within 14 days.

Whether or not you’re eligible for a speed awareness course depends on the individual offence and its severity.

And that’s also the rule of thumb for repeat offenders unless the second offence comes within three years of the first course.

Generally, motorists will not be offered a speed awareness course second time around but it all depends on what your offence is.

A common tale on UK roads says that if you don’t exceed the speed limit by more than 10 per cent (plus 2mph), you won’t get flashed, but Brake’s revealed that’s not true.

Brake said: “It is important to note this guidance is not legally entrenched, and that officers have the discretion to act outside it – [motorists] should be aware that this guidance also does not mean that they can break the speed limit legally.”

We’ve all seen motorists slam on the brakes when they spot a speed camera and its telltale white markings on the road, but according to Brake that won’t help you escape some speed cameras.

“The operation of average speed cameras prevents dangerous driving in this manner, and provides a strong deterrent to drivers who may not be detected by fixed cameras.”

This one is not true in the slightest.

There’s a rumour that if a speed camera that isn’t yellow catches you, you can’t be charged.

That is nonsense, if the camera is grey the offence remains valid.

All speed cameras in the UK are set to be painted yellow however it doesn’t mean your offence doesn’t count if the camera that snaps you hasn’t been painted yet. 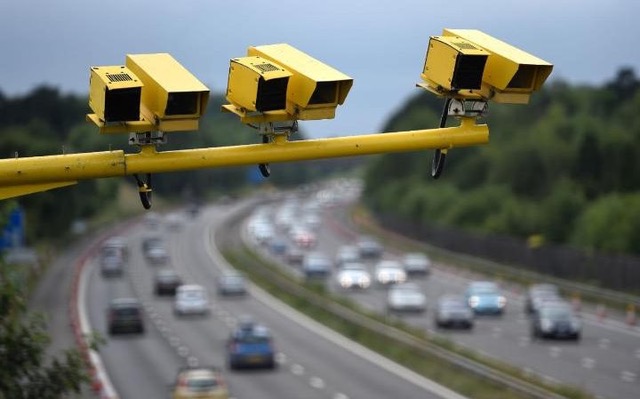 Lots of people ignore average speed cameras because they do not believe they work properly.

Again, that’s completely false. They prevent motorists from slamming on the brakes at a fixed speed camera, only to accelerate beyond the speed limit straight after.

“They are particularly beneficial as they enforce limits over a longer stretch of road, preventing law-breaking [motorists] from being able to speed up again immediately after passing a camera.”

Speed awareness courses are dished out to those who are eligible; motorists cannot request one because they’d prefer that than points on their licence.

If you get offered one, you can choose to take the offer up or ignore it, if you don’t you can’t ask for one.

Like unspent motoring convictions, speed awareness course must be declared to your insurer.

We’ve never seen a horse clear 30mph on a dual carriageway however even if it did, it’s not an offence.

Speed limits apply only to motor or mechanically propelled vehicles so cyclists are also immune to the punishments.

Brake said: “Whilst it is unlikely that a cyclist, or other road user on non-motorised transport, would be able to reach the necessary speeds to be above the limit, the law holds that legislation around speed limits covers only motor or mechanically propelled vehicles.

“However,” he added, “It is important that cyclists, like all road users, follow the laws of the road and travel safely and responsibly for conditions.”