Tinted visors on your motorcycle helmet

When the sun comes out, there are few places that beat the British countryside and few things that beat a ride out on your motorbike.

But sometimes the sun can be pretty annoying when you’re out on your bike, especially if there’s moisture on the road or the sun is low in the sky.

At this point it’s common sense to use a tinted visor rather than squint into the sun or ride blind and that’s why tinted visors are commonplace on UK roads, while lots of new helmets have drop-down tinted visors built-in too.

While your vision might improve, what’s not so clear is the laws that surround the use of tinted visors on UK roads and whether or not they’re actually legal.

What are the laws surrounding tinted motorcycle visors?

The laws surrounding motorcycle visors in the UK are cloudy at best because there are no hard and fast rules in place.

The legal rule for just how tinted your visor can be says it must allow a light transmission of 50 per cent.

As a general rule, motorcycle riders can wear a tinted visor in daylight however according to UK ‘Fitness to drive’ rules, you should not use tinted visors at night or in poor visibility.

So, they’re the rules, but trying to clarify what constitutes poor visibility is pretty difficult and putting a number on just how much light your visor lets through is difficult as well.

When you couple that with multiple police forces across the country who all take slightly different approaches to tinted visors, it makes the whole thing quite complicated for riders in the UK.

What does that mean for your insurance?

There are lots of rumours around the internet that your insurance could be invalidated if you are involved in a road accident while wearing a tinted visor.

This shouldn’t be the case; in fact there are only two helmet related points that your insurer should be interested in:

If your helmet and visor are either BS or ECE approved then your insurance should not be invalidated even if it is tinted.

And while we’ve got you, it’s always worthwhile pricing up Helmet and Leathers cover on top of standard motorcycle insurance just in case because as you know, helmets aren’t cheap. 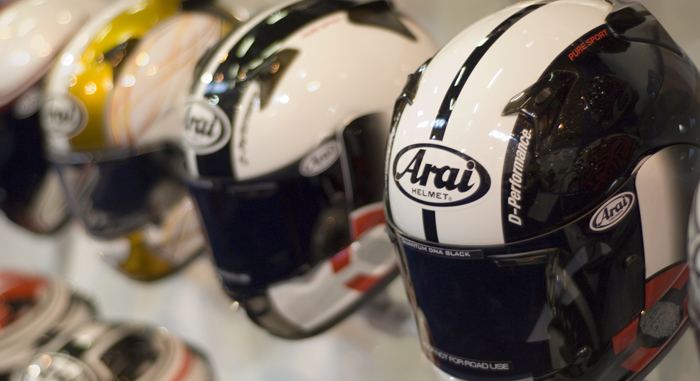 What does that mean for riders?

As a rule of thumb, we’d say avoid tinted visors unless you’re riding in broad daylight.

If you think the weather’s changeable and the sun is going to head behind the clouds or conditions are going to darken, take a clear visor with you and change it.

The same applies to sunglasses and goggles for anyone fond of an open face lid.

You can be pulled over by the police for wearing a tinted visor if they believe it does not allow enough natural light through.

If the police deem light and visibility to be poor you can also get pulled over and given three penalty points but there have been very few occasions where the police have stopped motorcyclists for wearing a tinted visor in the UK.

How do I know if I’m in the clear with the police?

Lots of UK riders do not want to run the risk of being stopped by the police full stop, especially for something like a tinted visor, which we understand at The Bike Insurer.

However the rule that is most important here says that tinted visors are legal during daylight hours. If you are going to be out when daylight starts to fade, you should also carry a clear visor with you.

And if you want to be really sure, you should contact your local police force and see what their stance is on tinted visors because each force’s guidelines can vary.

How do I know if I’m in the clear with my insurer?

As far as your insurer is concerned, you will not invalidate your policy if your visor and helmet is BS or ECE approved.

But if you want clarification, you should contact your insurer directly to see where they stand on tinted visors and helmet policy.

“When riding, you should always use a visor or goggles carrying
an ECE, C…

Your visor can have a tint up to 50% for daylight use.

“When riding, you should always use a visor or goggles carrying
an ECE, CE or BSI approval mark. During daylight hours a tint
of up to 50% is okay – legal tinted visors will be marked “For
daylight use only”. Before setting off, make sure your visor is
clean and free of smudges, scratches or marks which could
affect your vision, especially in strong sunlight.”