A brief history of the Suzuki Katana 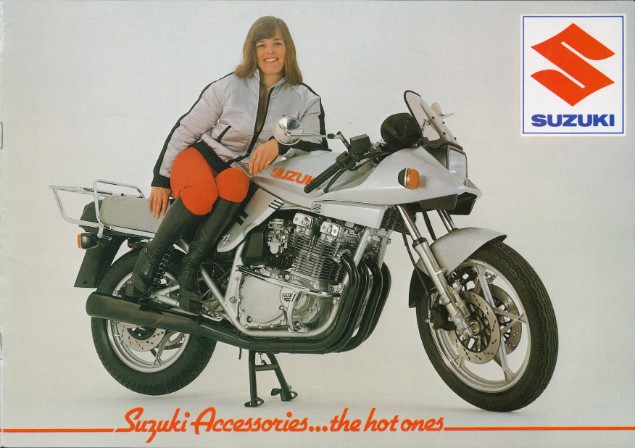 There’s no doubt one of the most significant names in Japanese motorcycle model history is that of the Suzuki Katana.

Like the Kawasaki Ninja or Honda FireBlade which both followed, the Katana was not just one model but a whole family of bikes.

From 1980-1985, if you fancied a Suzuki capable of sending shivers down your spine – you wanted a Katana, either on your bedroom wall or, preferably, garage floor.

No Suzuki – no motorcycle even – not before or since, had been so striking. The Katana still is today.

That significance is down to a number of things: first, and most obviously, the 1980 GSX1100S Katana, to give the original its full name, looked, with its sharp angles, blended-in bodywork and space-age silver livery, like literally nothing else.

That in itself, in the era of Star Wars and Buck Rogers, made Suzuki’s space-age newcomer stand out.

Second, with the original 1100 flagged by Suzuki as the ‘world’s fastest production motorcycle’, the first Katana also had the performance credibility to back up its peculiar cosmetics. 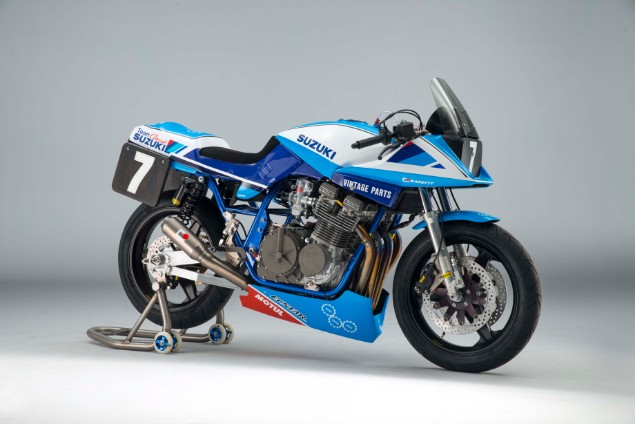 While last, but by no means least, the whole family of Katanas which followed, ranging from more accessible middleweights like the GS650G shaftie and affordable 550, to the ‘homologation special’ GSX1000S (complete with Mikuni smoothbore carbs) to the last true original Katana, 1984’s GSX750S3 with distinctive, ‘pop-up’ headlamp, gave the Katana family a breadth, a performance pedigree and a technological significance that, overall, was massively influential.

Elements of ‘Katana style’ didn’t just dribble down across Suzuki’s range in the early ‘80s, it lives on to this day. Blended-in seats, side panels and tanks, to give just one example, are part of the Katana’s legacy.

And yet the Katana nearly didn’t happen at all. Commissioned initially as a one-off ‘design exercise’, a concept bike was first displayed in 1979 and public reaction was so great that the Katana ended up being much, much more. Concept bikes don’t usually make it into production, after all – they’re too wild for that.

And even when they do, as with Yamaha’s MT-01 or Suzuki’s own B-King, they usually end up being sales flops. The Katana, however, was different.

In fact, the Katana was different from the off – in being the first Japanese motorcycle styled by an external design house. In the late 1970s, Suzuki had become concerned about the stagnating design of the ‘Universal Japanese Motorcycles’ of the era and wanted to make its bikes stand out with what it called ‘a European type design’.

And, with its European HQ being in Germany, Suzuki Germany marketing manager Manfred Becker turned to newly-formed German stylists, Target Design, to come up with the goods. 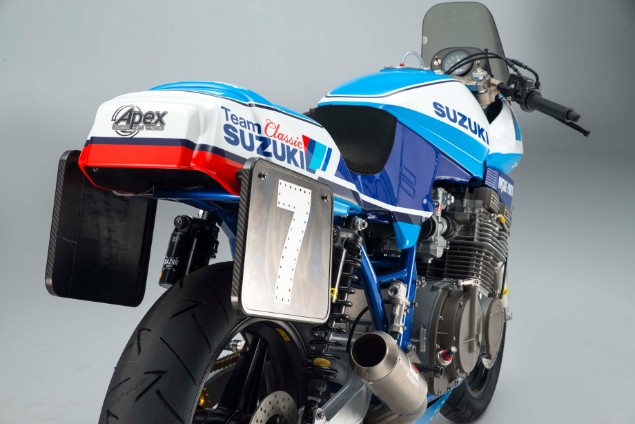 Target, comprising founder Hans-Georg Kasten, Jan Fellstrom and Hans Muth, had sprung to prominence with a restyled MV Agusta (which bore a striking resemblance to the subsequent Katanas) which they had created in association with, and published by, German magazine Motorrad. But this Suzuki commission enabled Target, and particularly Fellstrom (who was the main creative force behind the Katana) to take those ideas further still.

Suzuki’s first commission was for a sportier version of its 650cc four-cylinder shaftie. Target’s result was the ED-1 650 (ED standing for ‘European Design’), which later became the GS650G and GS550 Katanas.

Suzuki Japan, meanwhile, was sufficiently impressed to quickly follow this up with a second commission for a top-of-the-line sports model based on the then GSX1100 The half-faired ED-2 1100 (which would became the GSX1100S) was what Target came up with next.

And it’s this latter bike, as first shown at the Cologne Show in the Autumn of 1979, which was the start of the whole Katana sensation.

With its radical, angular purity ranging from its wedge-shaped, frame-mounted fairing (conceived to ensure the stability at speed Suzuki requested); faired-in side panels and stumpy short seat, the new prototype, although based on an unchanged GSX1100 frame, engine and cycle parts, was simply show-stoppingly different. 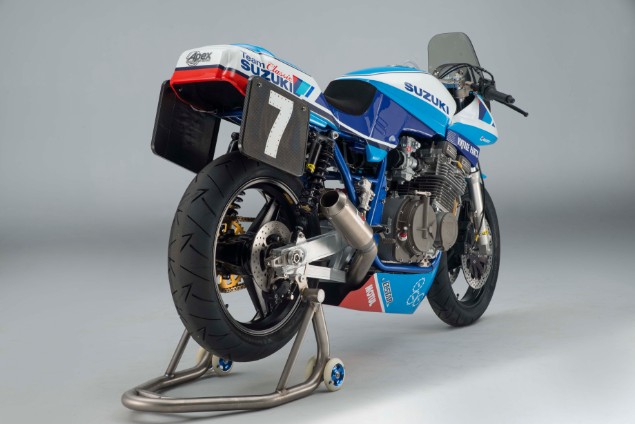 In fact, Suzuki was so emboldened by the reaction that it decided to put both into production and the rest, as they say, is history. In truth, the 1100 in particular, actually wasn’t a huge sales success as many were put off by those extreme looks and its high price – but nor was it a disaster either.

And while the 1100 had already been deleted by 1983, its brief, shining existence, the popularity of the more subtle 650 and 550 versions and Suzuki’s persistence in applying ‘watered-down’ elements of Katana design across its whole range in the early ‘80s (everything from the GS125 to the GSX550 to the GSX1100 retained shades of Katana for years to come), meant the Katana remained hugely significant.

Nor did it all end quite as suddenly as Suzuki intended, either. The Katana family had been conceived to give Suzuki’s air-cooled GSX sportsters added style. With the GSX made redundant by the first oil-cooled, racer-replica GSX-R in 1985 the Katana’s job, you might have thought, was done. Except… it didn’t quite work out that way.

First, in the US, Suzuki retained the Katana name applying it to all manner of arguably less-deserving machines such as the GSX600F ‘teapot’ and GSX750F.

Second, Suzuki itself revived the original 1100 Katana when, in 1990, to celebrate the company’s 70th anniversary, it took the unprecedented step of remanufacturing a batch of 200 Katana 1100s in totally original 1980 specification.

This proved so successful Suzuki repeated the operation the following year while later versions were also remanufactured (primarily for the Japanese market and with a few modifications) right up to 2001. 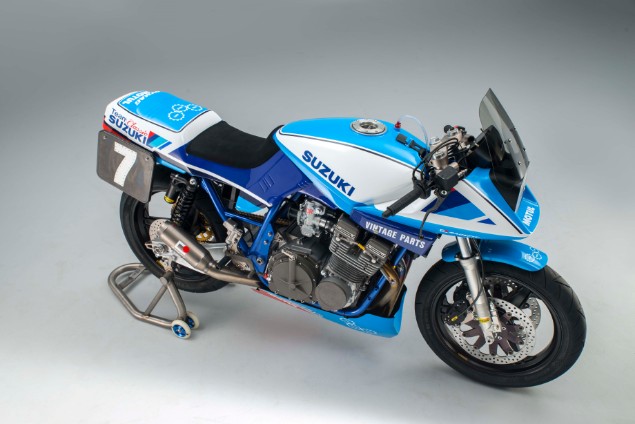 Third, spurred on by these bikes’ popularity, Suzuki the same year (1991) pre-empted the current retro fashion by 20 years by producing for the domestic Japanese market a 250cc, four-cylinder Katana replica based on the then Bandit 250. This was also then followed up with a 400cc version, both of which are occasionally available in the UK as grey imports.

And all of that combines to contribute to the Katana’s significance, its popularity, and its legacy. The original 1100 Katana itself may have had limited sales success, been something of a ‘Marmite machine’ and been fairly short-lived but the Katana story as a whole simply has it all.

The first 1100 had the earth-shattering looks and the ‘world’s fastest’ tag. The 1000 was the championship-winning production racer; the 550, 650, 750 and later 400s were the bikes of the masses and the later reproductions added to the classic allure.

Today, those original big bore bikes, the 1100 and particularly the race spec 1000, are as a bone fide Japanese classics as they get, with prices for the latter peaking at well over £10K. But a 400 or 550, or even a bike such as a GSX750ES with shades of Katana style, can still be had for peanuts.

And they’re all still tempting, striking and significant bikes, too. After all, without the Katana, the first Japanese bike to take bold design seriously, we might still be riding UJMs… 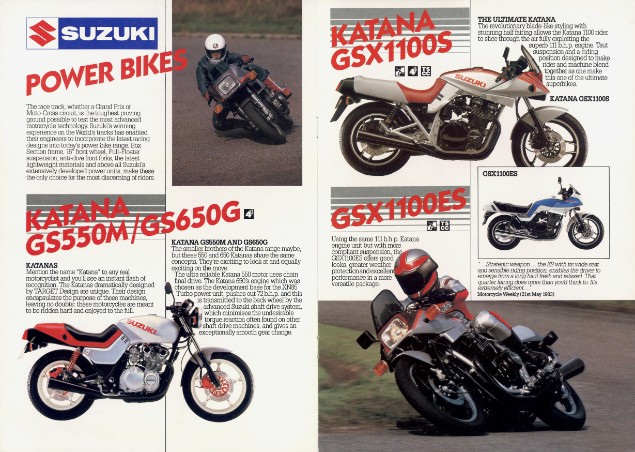 1979
Prototype Katana, the Target Design ED-2 debuts, at the Cologne Show to huge acclaim. Suzuki decide to put it (and the smaller ED-1) into production

1981
First non-Katana but with Katana styling influences, the GSX400F four goes on sale

1982
Japan-only GSX750S Katana goes on sale in domestic market. Essentially it’s a GSX1100S but with a GSX750E motor and larger back wheel. Some made it to the UK as grey imports. GS125E, with Katana-esque tank, also launched.

1984
New Japan-only GSX750S3 launched, based on GSX750EFE with revised styling including pop-up headlamp. Briefly officially available in the UK although most are grey imports.

1994
250/400 Katanas deleted but a further evolved 1100 goes back into production for Japanese market only with changes such as more modern brakes and 95bhp power restriction.

As racing limited bikes to 1000cc with few changes the homologation special GSX1000S version was launched the following year complete with smoothbore carbs and other changes. These are now the most desirable of all Katanas. 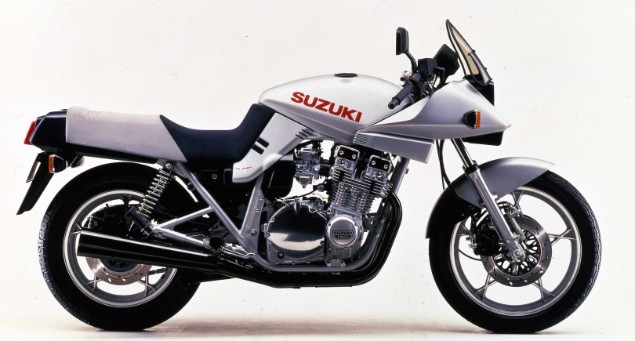 While in 1983 a 750 version was also produced for the home Japanese market that later evolved into the S3. 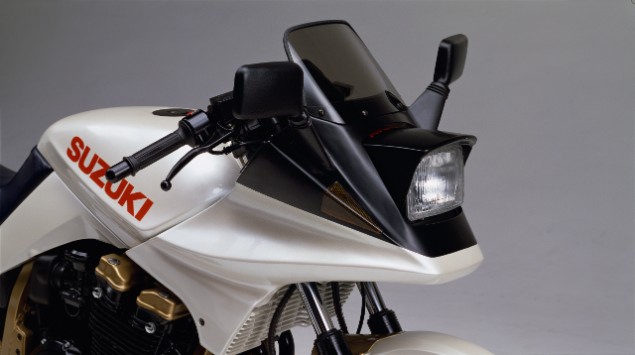 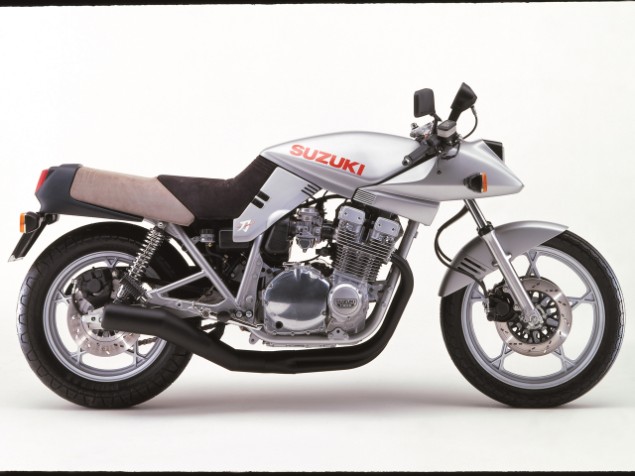 Similar, cheaper, more affordable middleweight was actually Target’s first design after being commissioned by Suzuki and was created after being tasked to come up with a sportier version of its GS650 shaftie.

Suzuki liked the result, the ED-1, so much it then commissioned Target to come up with the 1100.

A virtually identical 550 version was also built for the European market and was (and remains) the most affordable original Katana of all.

The later XN85 Turbo was also based on the 650 and featured Katana-influenced styling.